Interview with Phil Hughes, during their day off prior to ALDS Game 3 at home. 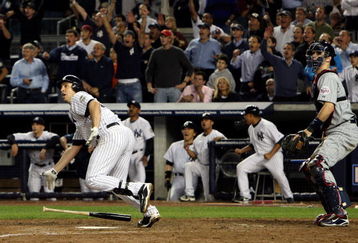 If there is one thing that the Yankees are good at, besides Baseball, it’s late inning drama.

They’ve done it before, and they did it again in the Game 2 of the American League Division Series against the Twins.

Never mind if A.J. Burnett allowed 3 hits and 5 walks while the
pitchers after him, excluding Phil Coke who only pitched against Joe Mauer, allowed 9 more hits. And it no
longer matter if the Yankees only had 7 hits. They slept better than
the Twins.

The first run was from captain Jeter in the sixth inning driven by
A-Rod’s sharp ground ball to the left field. And yet again, A-Rod helped the Bombers tie
the game as he hit a 2-run homer in the ninth inning.

It was a tough night. The Yankees sent seven pitchers from the bullpen
after Burnett while the Twins sent five. The last to pitch was Jose
Mijares and had to face Mark Teixeira.

There was no second deck text, but the first baseman of the Yankees hit
a solo home run close to the left foul pole, his first walk-off home
run. It was so close that the crowd went on a microsecond pause before
being driven into euphoria.

Mark Teixeira was the hero of the night. He put one more score on board
for the Yankees and gave the Bombers 2-0 lead in the ALDS.

As expected, the wild A.J. Burnett secured a pie on the hero’s face.