Because I overslept. My bad! This has never happened before, in 2009. I’d always be unconsciously conscious that there’s a game to watch. What a fail.

Even so, I’m glad my boys won against the Cubs, 10-4. CC Sabathia was pitching. Now I am relieved for that good news.

But I do miss watching MLB games. Has been really busy these days. 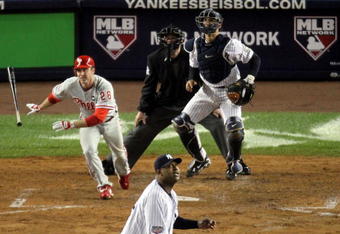 Game 1 of 2009 World Series was, without a doubt, a history both for the New York Yankees and the Philadelphia Phillies.

Chase Utley was walked in the first inning and in the third inning
after eight pitches from CC Sabathia, the second baseman of the
Phillies hit a solo home run to right field. Three innings later, Utley
hit another solo homer in the right field.

It was the first home run, then first two consecutive home runs, that
CC Sabathia gave up on a leftie in the Yankee Stadium. Utley’s third
inning homer was also the first one in the Bronx on a post-season game.

The Yankees lost Game 1 of the World Series, 1-6 against the Phillies.
It was their first post-season lost in the Yankee Stadium.

Game 4 of the Fall Classic would be CC’s chance to take command in the
mound and be the “CC” he used to be during the regular season, and
during the ALCS.

The tension in the field, as well as among the fans, was apparent as
Chase Utley stepped into the batter’s box in Citizens Bank Park. With
two balls and no strike, Utley drilled a double sending off Shane
Victorino to the home plate for the Phillies’ first run.

The next two at-bats of Chase Utley were not productive. He popped out
to second baseman Robinson Cano in the third inning and to shortstop
Derek Jeter in the fifth inning.

The seventh inning was the pay-off at-bat. On two strikes, Chase Utley
hit another long shot to the right field from the same pitcher, CC
Sabathia.

As Utley returned to the Phillies dugout, so did Sabathia to the
Yankees dugout. He would not return to the mound. Joe Girardi had Joba
Chamberlain relieve for CC.

The Yankees did win Game 4 on 7-5 against the Fightin’ Phillies. They still lead the series on 3-1. 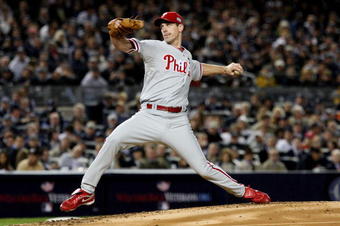 It
was a total domination by Cliff Lee against the New York Yankees in
World Series Game 1. The left handed pitcher, who was traded from the
Indians in July, pitched in a complete game with 80 strikes and 42
balls on Wednesday night.

Lee, who was a former Cleveland
Indian teammate and a close friend of Game 1 opponent CC Sabathia,
struck out two batters in the first and another two in the second
inning. He allowed an RBI, with extra base hit, for Derek Jeter in the
third inning.

But in the fourth inning Cliff Lee did nothing
but strike out all batters in the box: Teixeira, A-Rod, and Posada. All
three struck out at least twice. A-Rod was struck out thrice.

The Yankees scored in the bottom of the ninth, but it was on throwing
error of shortstop Jimmy Rollins. Lee allowed 6 hits, no walk, and 10
strike outs. 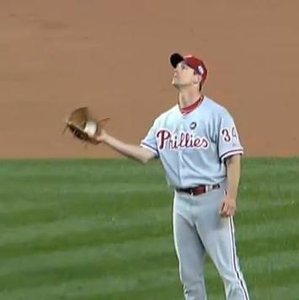 Besides the ten strikeouts and no runs, two of
Lee’s impressive performances include a waiting-in-the-mound catch for
Johnny Damon’s pop-up in the sixth inning and the behind-the-back catch
when Robinson Cano hit the second pitch in the eight inning.

A big smile painted on the pitcher’s face and a shrug showed how much fun it was for him to start the bottom of the eight.

The 2008 Cy Young awardee started his game with a strikeout and ended
it with another strikeout. Both strikeouts were to World Series
veterans Derek Jeter and Jorge Posada.

Cliff Lee did not just
secure the game for the Phillies, along with Chase Utley’s back to back
home runs, he also saved their bullpen. He now holds 3 starts with 3-0
wins in his 2009 post-season resume. 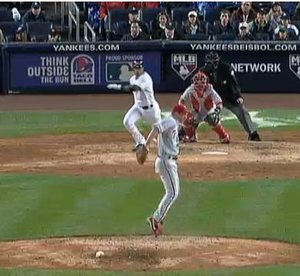 The defending champions beat the Bronx Bombers on 6-1 and now have a 1-0 lead in the 2009 World Series. 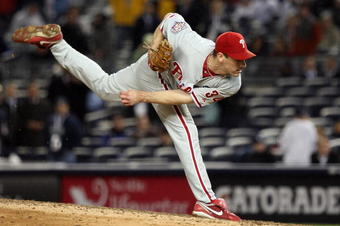 Cliff Lee has been tremendous in the first half of World Series Game 1
against the Yankees. He struck out two in the first as well as in the
second inning. As if those were not good enough, Lee struck out Mark
Teixeira, Alex Rodriguez, and Jorge Posada in the fourth inning. It was
the second strikeout for Teixeira and A-Rod.

CC Sabathia, a
former Cleveland Indian teammate and a close friend of Cliff Lee,
scuffled in the first inning. He’s thrown 24 pitches in that inning
alone. And in the third inning, CC pitched eight times to Chase Utley
before giving up a home run in the right field near the foul pole.

Utley’s home run was the first homer of the 2009 World Series and the
first home run in the new Yankee Stadium in a post-season game.

As for CC, it was the first home run he gave up on a left-handed hitter
at home. The next time he faced Chase Utley, another home run was given
up in the right field. It was a back to back home run for Chase Utley.

Cliff Lee is just so striking and the Fightin’ Phillies lead by 2-0 against the Bronx Bombers in the first six innings. 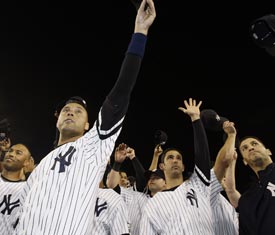 The wait is finally over.

After
5 days of waiting, the Philadelphia Phillies now know which team will
they face. The New York Yankees just defeated the LA Angels in the
American League Series of Game 6, 5-3 on board. It was a game that
lasted for 3 hours and 40 minutes with 50,173 people in full
anticipation.

The Phillies and Yankees have faced each other
during the regular season, and the Phillies have won the series, 2-1,
against the Yankees. Game 2 of that series was a walk-off win as Melky
Cabrera hit a single, scoring Robinson Cano. Alex Rodriguez provided
the tying run, a two-run homer to the right field.

Game 1 of the
World Series will be started in the Yankee Stadium and starting
pitchers will be CC Sabathia and Cliff Lee. Both pitchers are
considered aces in their ball clubs. But who will prevail?

Cliff
Lee has a 14-13 record, 245 hits, 3 walks, 10 strikeouts, and a 3.22
ERA. CC Sabathia, on the other hand, has an amazing 19-8 record. He has
allowed 197 hits and 67 walks while striking out 197. If Mo is capable
of calming the Yankees organization, and fans alike, during the late
innings, CC has a calming effect on me when he’s starting for the
Bombers.

Both NL and AL teams know how big the World Series will
be. The Philadelphia Phillies will do everything to defend their title
while the New York Yankees will be looking forward for a 27th World
Series title.

There are a lot of World Series rookies from the
Yankees, but the Old Guard remains intact. The last Old Guard
appearance in the World Series, excluding Andy Pettitte who was in the
Astros, was on 2004. This would be a nice reunion, especially that
Pettitte is back to the Yankees. With new members in their club, the
World Series will be more exciting. 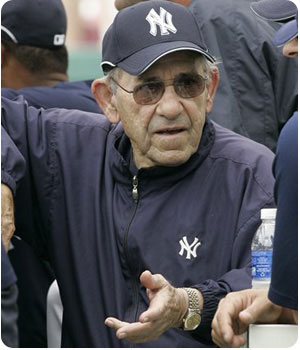 The Phillies and Yankees are
strong teams in their respective leagues, but only one team will claim
the 2009 World Series title. I am a fan of both teams, but I am rooting
for my top favourite team, the New York Yankees.

The National
and American League Series are over.  But, “It ain’t over till it’s
over.” It must be a wonderful night for Yogi Berra who watched the
game. I’d love to hear what he’s got to say about Game 6.

If everyone in the Yankees Stadium was cold, CC
Sabathia was hot in the mound.
The Yankees’ starter dominated 8 innings with 7 strikeouts, 4 hits and just 1 run.
CC did give up a walk to Kendry Morales in the seventh inning but no damage done. 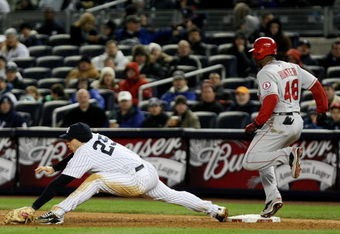 In the top of the sixth, Sabathia had a 3 up, 3 down with the help of amazing
defensive performances from Johnny Damon and Mark Teixeira,
respectively. Damon almost dived to catch Bobby Abreau’s line out hit
to
the left field. The next batter was Torii Hunter whose bunt grounded
out to Sabathia to Teixeira. The Yankees’ first baseman’s legs were in
full extension in almost a split as he caught the ball in the
first base. With two batters already out, Sabathia struck out the third
batter, Vladimir Guerrero, on one ball count.

One of CC’s amazing strikeouts was to Mike Napoli in the seventh
inning. The anticipated strike out earned a loud cheer from the crowd and a big “Yeah!” from CC himself. Napoli was the second batter
Sabathia struck out in the inning. The first was Juan Rivera.

Sabathia still pitched in the eighth. Erick Aybar and Chone Figgins,
the two Angels that gave the Yankees a run on Matsui’s pop out in the
bottom of the first, both grounded out. Next to bat was Bobby Abreu who
hit a fly out to left field.

CC
allowed only one run earned from Kendry Morales’ line drive base hit
that advanced Vladimir Guerrero, who hit a double RBI, to the home
plate. Sabathia left the mound with 1.13 ERA.
The
Yankees were able to have 4 runs from Jeter, Damon and Cabrera. Damon
scored twice. A-Rod attempted to make a run in the bottom of the fifth,
but he was called out at the plate as he collided with catcher Jeff
Mathis.

In the top of the ninth inning, Mariano Rivera was called from the bullpen to
close the game. His first pitched was to Torii Hunter who earned a walk on
one strike count. Next to bat was Vladimir Guerrero who struck out on
Mo’s 91 MPH cutter. The last two batters, who had to hit nothing but
the Sandman’s cutter, flied out to right field and centre field, respectively.

Mariano Rivera sealed the ALCS Game 1 with the Yankees leading, 4-1, against the Angels.

I wanted to post this in Bleacher Report, but I thought otherwise. But I have posted something related: Thou shalt not steal.

Though I haven’t posted this in b/r, I still want my “article” posted so I’ll have it here. Comments, suggestions, and anything of the like are welcome. Thank you.

It all started with almost an hour of delay because of rain.

As if those were not enough, another base was made available for Suzuki
in the ninth inning when Aceves missed to catch the ball from Mark
Teixeira, but it was accounted as an error of the first baseman. It
would’ve been the first out of the inning.

Next in line to Suzuki was first baseman Russell Branyan, who on the
first pitch of Aceves had hit all the way to the restaurant of the
Yankee Stadium.

The 2-run homer of Branyan was the last hit of the Mariners. It was
also the last stay in the mound of Aceves, who replaced CC Sabathia and
brought the last out of the sixth inning. David Robertson replaced
Aceves.

Determined not to let any more mishaps or whatever chance for the
Mariners, the next three hitters were all kept out of the bases by Mark
Teixeira.

Jose Lopez popped out to Teixeira followed by DH Mike Sweeney who
grounded out to Robinson Cano then to the first baseman. The last
Mariner who grounded out was the first one to hit a homer, Franklin
Gutierrez who hit right back to David Robertson.

The last two runs of the ninth inning gave the Mariners an 8-4 win and kept the Pinstripers from sweeping the series.

The truth is I still wonder if I should post this in Bleacher Report.

Music:Letters to Cleo – Cruel to be Kind

Hope, Faith, Love . . . for the Yankees, and Baseball
Blog at WordPress.com.